Characteristics of the IPP score

In a conventional log-rank test, patients are classified into two or more groups based on their gene expression levels, and the relationship between prognosis and the expression level of an individual gene is analyzed. Average and median levels of gene expression are both used as threshold values to classify patients into groups. To evaluate the prognostic significance of a gene, we designed IPP to consider all of the possible thresholds for classifying patients into two groups based on gene expression levels (Fig. 1A). The calculated z-scores of all thresholds were displayed as a matrix (IPP matrix), and the average of all z-scores was the IPP score. The sign of the IPP score represents the relationship between prognosis and gene expression level. Negative and positive IPP scores indicate adverse and favorable genes, respectively, meaning that a high level of expression is associated with a poor and good prognosis, respectively. A detailed explanation of the IPP score calculation is provided in the “Overview of the IPP calculation” section within the Materials and Methods (see Eq. (1)).

An important characteristic of the IPP score is its ability to identify the prognostic significance of genes that are missed with the conventional log-rank test, which uses average or median values as gene expression thresholds. We identified prognostic genes that were shown to be statistically insignificant by the log-rank test, using average or median threshold values, based on IPP score differences among genes (Fig. 1B). Detailed examples illustrating the differences between IPP and the conventional log-rank test are provided in Supplementary Figure 1. These examples show that IPP obtain superior results to the conventional log-rank test in terms of identifying prognostic genes. We calculated IPP scores for 21 breast cancer datasets that included a total of 2,735 patients (Table S1). To investigate IPP score characteristics, we compared the IPP score distributions among the independent breast cancer datasets (Supplementary Fig. 2 and 5A; Table S2). Despite the distributions of IPP scores being dissimilar among datasets, all datasets had a maximum frequency of over 1,500 genes, suggesting that more than half of the total genes were unrelated to prognosis.

Robustness and consistency of IPP

Robustness and consistency in prognostic gene selection refer to the degree of similarity among the prognostic genes identified from independent datasets. To verify improvement of robustness and consistency, we compared prognostic genes identified by IPP with those obtained from the conventional log-rank test, which uses the median and average values as gene expression level thresholds. First, we focused on the robustness of individual scores within each dataset by investigating the degree of dependence of each score on the number of patient samples. Bootstrapping and subsampling of two datasets, E-MTAB-748 and GSE17907, were performed and we compared the scores from all samples to those from randomly selected subsamples. IPP showed smaller differences between scores from all samples versus random subsamples than the log-rank test. In addition, variation among scores using IPP was less pronounced compared with that seen with the log-rank test (Fig. 2C and Supplementary Fig. 6C,E). We also analyzed the effect of sample size by calculating Pearson correlation coefficients (r) between the scores from all samples and those from random subsamples. IPP showed a higher correlation in all cases of subsampling than the conventional log-rank test (Supplementary Fig. 7A). These results indicate the superiority of IPP in terms of robustness compared with the conventional log-rank test. 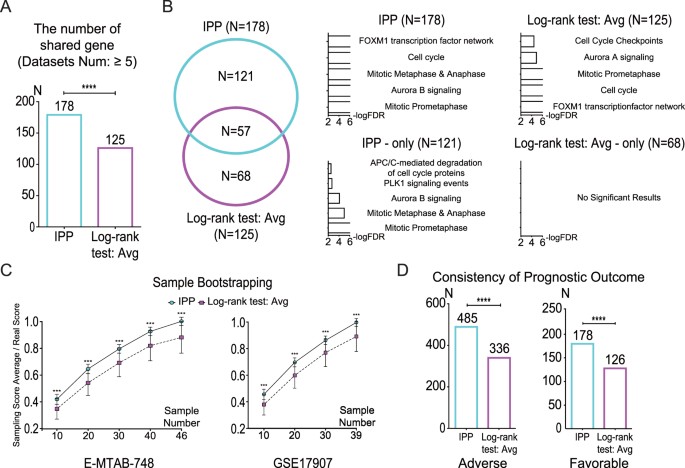 Lastly, we examined the consistency of the relationship between the expression levels of the identified genes and prognosis. A gene is considered adverse if high-level expression is associated with a poor prognosis, such as a short survival or relapse time. When high expression of a gene is associated with a good prognosis, then the gene is considered favorable. We refer to these relationships as outcome relation. Since the outcome relation is a significant feature of prognostic genes, we analyzed the consistency of outcome relation among datasets (Fig. 2D, Supplementary Fig. 6D and Supplementary Fig. 7B). Each gene is assigned two numbers, indicating the number of datasets in which the gene is adverse and favorable. To compare the consistency of outcome relation between IPP and the conventional log-rank test, the numbers of datasets in which the gene is adverse and favorable were counted for each gene (Supplementary Fig. 7B). We summed the numbers of genes that were adverse or favorable in at least 17 datasets. IPP had a greater number of genes in the adverse (n = 485) and favorable (n = 178) classes than the log-rank tests using the average (adverse, n = 336; favorable, n = 126) and median (adverse, n = 337; favorable, n = 139) values as expression level thresholds (Fig. 2D and Supplementary Fig. 6D). These results show the higher robustness and consistency of IPP than compared with the conventional log-rank test.

It is well known that different subtypes of breast cancer have distinct characteristics. To investigate subtype-specific prognostic genes, we calculated IPP scores for a total of 16 breast cancer datasets by reference to three distinct molecular subtypes: luminal (ER-positive/PR-positive; Supplementary Fig. 9A), HER2-enriched (ER-negative/PR-negative/HER2-positive; Supplementary Fig. 9C), and triple-negative (ER-negative/PR-negative/HER2-negative; Supplementary Fig. 9B) based on ER, PR, and HER2/ERBB2 immunohistochemistry information. Datasets with fewer than 20 patient samples for three molecular subtypes were excluded from the analysis. To ensure that the numbers of patients for all datasets were considered, we calculated representative IPP scores for gene using Liptak’s weighted method9D). Subtype-specific prognostic genes represented the top 5% of all genes (n = 557 genes among a total of 11,123 genes) based on the absolute values of the representative, integrated IPP scores. Next, we performed Reactome pathway enrichment to investigate the characteristics of subtype-specific prognostic genes.

In luminal (ER-positive/PR-positive) breast cancer, the proportion of adverse and favorable genes was 83.7% (n = 466) and 16.3% (n = 91), respectively, out of a total of 557 prognostic genes (Fig. 3a, upper). Based on enrichment analysis, only 54.6% (n = 304) of adverse genes and 11.5% (n = 64) of favorable genes were included within the functional groups. Enrichment analysis showed that adverse genes were composed of cell cycle-related genes, such as those involved in “mitotic prometaphase”, “mitotic metaphase and anaphase” and “cell cycle checkpoints” (Fig. 3a, lower right). In addition, 50.2% of the adverse prognostic genes (n = 234) had at least one PPI with each other, and thus serve to organize PPI networks (Supplementary Fig. 11, Middle). Among the favorable genes, we observed several functional groups, such as “phenylalanine metabolism” and “p53 signaling pathway” (Fig. 3a, lower left panel).

The IPP method led to the identification of prognostic genes that had unknown functions and were therefore not assigned during enrichment analysis. We hypothesized that these genes were novel prognostic genes; therefore, we performed detailed analyses of copy number alteration (CNA) and mutations of these genes using The Cancer Genome Atlas (TCGA) data provided by cBioportal

Among all prognostic genes (n = 557), about 30% were not assigned to any functional group by Reactome pathway enrichment analysis of luminal (33.9%: adverse, 29.1%; favorable, 4.8%, Fig. 4A, upper panel), HER2-enriched (36.7%: adverse, 25.0%; favorable, 11.7%, Supplementary Fig. 10B, upper panel), and triple-negative (31.4%: adverse, 21.0%; favorable, 10.4%, Fig. 4B, upper panel) breast cancers. Among the unassigned genes, the CNA states of METTL17 showed a marked association with prognosis (Fig. 4A, lower right panel). Because METTL17 was an adverse prognostic gene on IPP, higher gene expression of METTL17 indicates a poorer prognosis. Therefore, it is possible that patient groups with amplification and deletion of this gene have lower and higher survival probability than the neutral group, respectively. The other three representative genes, CADPS2 (Fig. 4A, lower left panel), PARP8, and TULP2 (Fig. 4B, lower panel) showed results consistent with those obtained by IPP. Despite few patient samples showing mutations, and a lack of information on breast cancer subtypes, we found that prognostic genes identified by IPP, such as DONSON, MKI67, FAM171A1, TENM4, C16orf45, and RABEP2, showed statistically differences in survival probability between mutation and non-mutation groups (Supplementary Fig. 14). These data demonstrate that IPP has the power to identify novel prognostic genes.