A Tour of Computer Systems


If you dedicate yourself to learning the concepts in this book, then you will be on your way to becoming a rare “power pro-grammer”

1.2 Programs Are Translated by Other Programs into Different Forms

1.3 It Pays to Understand How Compilation Systems Work


For simple programs such as hello.c , we can rely on the compilation system produce correct and efficient machine code. However, there are some important reasons why programmers need to understand how compilation systems work:

Understanding link-time errors.In our experience, some of the most perplexing programming errors are related to the operation of the linker, especially when you are trying to build large software systems.


Avoiding security holes.For many years, buffer overflow vulnerabilities have accounted for the majority of security holes in network and Internet servers.

If the first word of the command line does not correspond to a built-in shell command, then the shell assumes that it is the name of an executable file that it should load and run.

1.4.1 Hardware Organization of a System 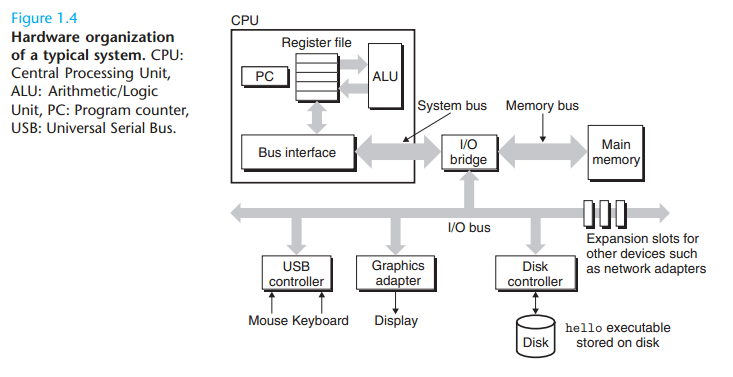 Most machines today have word sizes of either 4 bytes (32 bits) or 8 bytes (64 bits). For the sake of our discussion here, we will assume a word size of 4 bytes, and we will assume that buses transfer only one word at a time.

Input/output (I/O) devices are the system’s connection to the external world. Our example system has four I/O devices: a keyboard and mouse for user input, a display for user output, and a disk drive (or simply disk) for long-term storage of data and programs.

The main memoryis a temporary storage device that holds both a program and the data it manipulates while the processor is executing the program. Physically, main memory consists of a collection ofdynamic random access memory (DRAM)。


The central processing unit (CPU), or simply processor, is the engine that inter-prets (or executes ) instructions stored in main memory.


Load: Copy a byte or a word from main memory into a register, overwritingthe previous contents of the register.

Store: Copy a byte or a word from a register to a location in main memory,overwriting the previous contents of that location.

Operate: Copy the contents of two registers to the ALU, perform an arithmetic operation on the two words, and store the result in a register, overwriting the previous contents of that register.

Jump: Extract a word from the instruction itself and copy that word into the program counter (PC), overwriting the previous value of the PC。 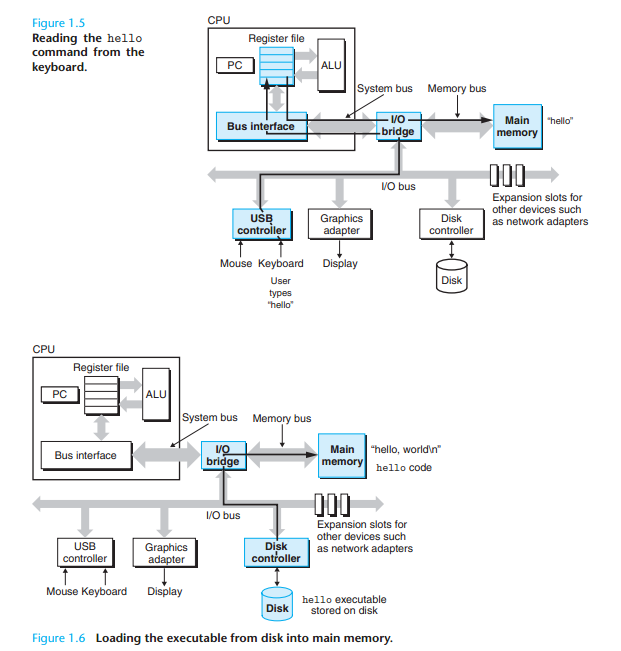 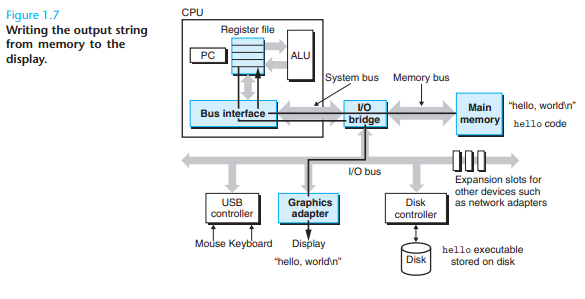 
Even more troublesome, as semiconductor technology progresses over the years, this processor-memory gap continues to increase.

The L1 and L2 caches are implemented with a hardware technology known as static random access memory (SRAM). 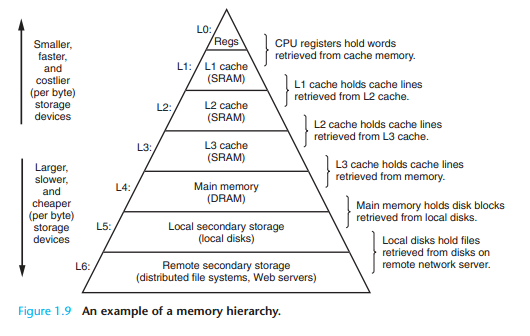 1.7 The Operating System Manages the Hardware


A process is the operating system’s abstraction for a running program.

Traditional systems could only execute one program at a time, while newer multi-core processors can execute several programs simultaneously. In either case, a single CPU can appear to execute multiple processes concurrently by having the processor switch among them


Although we normally think of a process as having a single control flow, in modern systems a process can actually consist of multiple execution units, called threads, each running in the context of the process and sharing the same code and global data.

Virtual memory is an abstraction that provides each process with the illusion that it has exclusive use of the main memory. Each process has the same uniform view of memory, which is known as its virtual address space .


A file is a sequence of bytes, nothing more and nothing less. 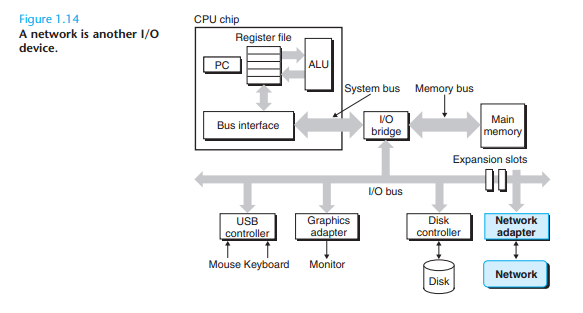 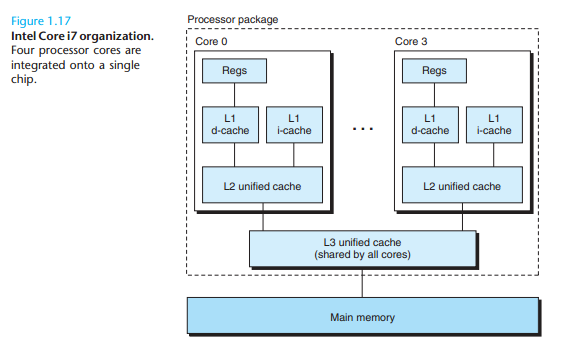 
modern processors can execute multiple instructions at one time, a property known as instruction-level parallelism。

1.9.2 The Importance of Abstractions in Computer Systems